The purpose of this guide is in a way to compress things which you learn in the arena with a lot of experience and time and to explain them to the newer players so they can improve faster by understanding how the PVP actually works much quicker than others. Hopefully, after reading this thread more people will improve in PVP faster than they would normally and we'll get more arena in which people are going to play their classes to the maximum. First, Let us understand the Gears, Skill, and Situation. 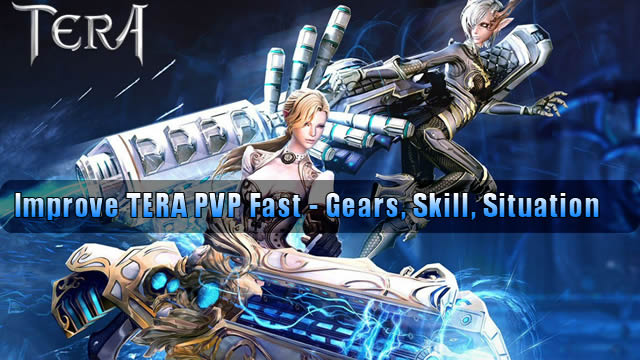 >> Gears~ Aah yes, everyone's favorite excuses. Well contrary to popular belief, gear in Tera isn't so important. If you play good you can win even with VM1, however, that requires your enemies to play much worse which is not always the case. You need gear for really good enemies but you don't really need to outgear them to beat them. Currently, strikeforce is almost as strong as nightforge and even if, nightforge is obviously better, gear is not really an excuse. The difference between SF and NF is 2.5% in stats or so and 1 extra bonus which is good but at best is just 4-5-6% less damage or more heal received or something like that. Do you know that one step to the left makes you dodge an arrow and saves you 40k damage? It's not your gear it's your movement.

>> Skill~ What is the skill? It depends on many things but skill in Tera is often .. everything. Player A can have 100 skill and player B can have 80 skill but player B can be better at something than player A, however, in the end, player A is more skilled because he does stuff better overall and "snowballs" into a better situation. Skill is the way you move and the way you fight, like literally. I've met more than a few teams that have outgeared my team and they have lost within literally 30 seconds. In TERA (unlike most games) one step to the left can save you from so much damage. One jump can save you from death and a single stagger can interrupt a huge damage skill coming your way. It's not your gear that's carrying you its all the little stuff.

>> Situation~ What does that mean? Tera is one of the most situational games in which everything can matter, be it buffs, crux buffs even, small delay, random crit, someone walked in your room and distracted you, display. Tera is very situational. A sorcerer which you can beat 30 out of 30 in a duel can one-shot you in the arena or even in the duel, should you let him. Good players are able to manipulate the situation in their favorite way more than worse ones. If you're sick today and your shield blocks are a bit slow you'll end up taking so much damage, that's what I mean by the situation. In this game, gear doesn't matter as much as the situation and small things do.

>> Technical difficulties~ well, unlike gear, lag is actually an excuse. Lag ruins game in so many ways but oh well what can you do about it? In Tera there's the infamous desync.. contrary to popular belief, there is no way to reliably desync yourself in Tera and use it to your advantage. Many noobs seem to think that u can desync at will and even make desync work for you but I have yet to see someone who prefers to jump instead do damage in arena. If you do stupid stuff to desync you'll most likely end up giving a big advantage to your enemy. You can't jump while holding W to desync because it doesn't always work and I don't know a single good player that lets his fate rest in a coin flip.

Desync sucks, desyncs happens a lot and it happens regardless of what your enemy is doing. It's not your fault, it's not my fault and it's not your enemy's fault. It may be a legit excuse but it happens all the time. I have never tried to intentionally desync but have desynced so many times (unintentionally, even if my enemy doesn't think so), it's unreliable, it's inefficient and it's not worth it. Please select your server and faction for buying Tera Online Gold. U4gm.com is a much professional seller that sells cheap TERA gold for PS4, Xbox One, and PC. Full stock & fast delivery & safe & 24x7 customer support!

The Main Magnet In The Supplement Is Usually The Bestiary League

The Patch 3.2.0 is actually launched on yesteryear, spot 3.2.0 will rekindle most lessons. With regards to that builders perhaps there is more significant diversity as well as gentle enlargement of these this benefit from the minimum acceptance among gamers. The particular spot happens to be exclusively available on the PC, this gaming console variation are going to be introduced next week. The main magnet in the supplement is usually The Bestiary League, that is certainly some sort of little league revolving about colossal hunts. If you want to discover every little thing you'll be able to find more at here.

How To Build Structures In Fortnite

Now U4GM shares with you How To Build Structures In Fortnite. U4GM as a professional Fortnite Items website offers secure, fast and low-priced Fortnite Weapons for you. With more than ten years of excellence, we've served a large number of buyers.