Thanks to the current football boom in Germany, the Madden series is also becoming more and more the focus of the players here. So well, this year's offshoot is again presented in a famous form. In our review of Madden NFL 18, you will learn whether the football title is a new addition to the gameplay and whether the new story mode offers more fun than The Journey in FIFA 17. 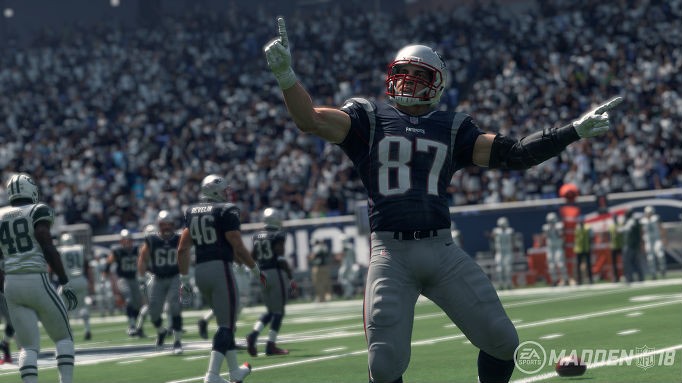 In Germany king football rules with an iron hand. Red financial jugglers from the south and black-and-yellow mimosa from the west determine the sports reports under the original German terms such as "Clasico". But resistance is so slow. The ever-present American spectacle called Football is becoming increasingly popular here. This also puts the traditional Madden series in the focus of players. Where some five people were interested in EA's football series some time ago, the title now sells better every year. Because it is a good thing that the series show itself in the time of the German football boom also with each offshoot again a bit stronger.

Madden NFL 18 in Test: A matter of balance

If you have already played the predecessor, you will hardly discover anything new. During the last year, a new gameplay feature was introduced with the Jukes - that is, the ability to perform deceiving maneuvers with the right-hand maneuver by means of a right-hand analogue stick, thus eliminating the opposing defense - and you could choose in franchise mode whether you wanted a complete match Defense, only the offense or only situations that are relevant to the outcome of the game, one looks for such innovations in Madden NFL 18 in vain. The title builds completely on the playful scaffolding of the predecessor, but refines the event with better balancing.

The Jukes are no longer overpowering, some moves have been defused, and the defenses of AI-controlled teams do not fluctuate so much. The game feels much more realistic. Good teams with strong defenses still need to be cleverly cleared, but can also be better overcome with tactical adjustments. Weaker teams, on the other hand, are no longer quite as pleased and adapt to your tactics.

In addition, the different teams are now more clearly aware of their playing styles. Beginners continue to listen to the suggestions of the game, but those who are on the higher difficulty levels will not be able to familiarize themselves with the respective Playbook of a team. Beginners can now also activate Arcade mode, which makes the games much more spectacular. Especially nice: the too often blocking at extra points and field goals was drastically reduced. The blocks are still possible, but now it really comes to absolutely perfect timing.

Like last year's FIFA, the Madden series has also dared to switch to the Frostbite engine. Madden NFL 18 now looks a bit more handsome than the previous version and the animations seem smoother. Especially the Jukes look just wonderful now. While the series had 25 problems with collision physics during the last engine change at Madden, this time luckily everything went smoothly. The hits and tackles are even a little more powerful and the nature of the contact is still crucial, if someone goes to the ground.

Here, both the tackling player and the "victim", things like hardness, impact angle and speed play a role, whether and how someone goes to the ground. With the change to the Frostbite engine, however, a few micro-jerkers have also made their way through the middle of the game. In addition, the known minor clipping errors were also maintained.

A great innovation has Madden NFL 18 nevertheless. This is called Longshot and is a story mode similar to The Journey from the last FIFA. Here you take on the role of the young quarterback Devin Wade, who wants to make it into the NFL after a fatal blow over a casting show. The four-hour-long story does not come without the usual sports-movie stereotypes, but shines with sympathetic characters and a good story-telling as well as great guest performances of well-known actors and football-sized. The story is fairly simple and is partly based on Quicktime events, but it is much more entertaining than FIFA's The Journey, which in the middle of the middle was a lot of idle. Devin's story may be continued in the next part.

Madden-Store.com as one of the most professional online store which glad to share more Madden 18 news and cheap Madden 18 coins with instant delivery.